Source of the Week: A Shipwreck Poem 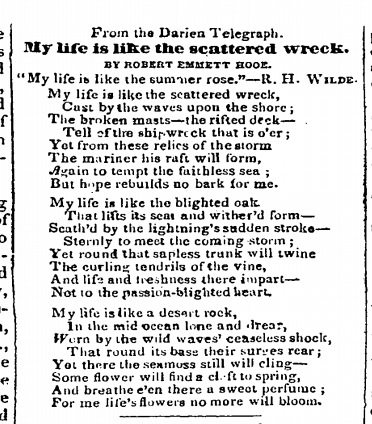 Tallahassee’s The Floridian published Robert Emmett Hooe’s ”My Life is like a scattered Wreck” in June 1838. As always, there is more to this overly melodramatic piece of verse than meets the eye. The poem was culled from the Darien Telegraph, a fledgling newspaper based in the heart of coastal Georgia. The author, Lieutenant Robert Emmett Hooe of the US Navy, had been found guilty of voluntary manslaughter by the Superior Court of Glynn County, Georgia a month before “My Life” appeared in print. That a naval officer would use a shipwreck metaphor to describe his fall from grace is hardly surprising. But the metaphor’s resonance across the social spectrum of mid-century America tells us quite a bit about the American experience. (what? — stay tuned!) Hooe appealed the decision but I have yet to find out what happened to him. In any case, the lieutenant’s three stanzas endured–five years after appearing in The Floridian, Knickerbocker, or, New-York Monthly Magazine published “My Life is like a scattered wreck.”

Filed under Source of the Week

4 responses to “Source of the Week: A Shipwreck Poem”